I’ve never been much of a writing group gal. Every time I try to write with the local NaNo group, I end up distracted, chatting to other writers or listening to their conversations. Plus, I tend to go, “OH SHINY!” if my environment changes too much.

That’s not the only problem, though. I’ve written before about why critique is only as helpful as the people providing it, and writing groups tend to be like this: 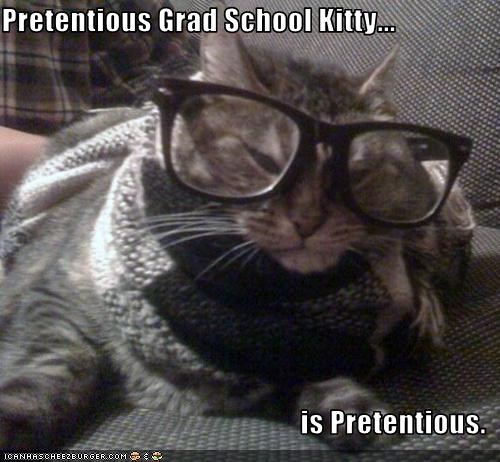 No admission without hipster glasses.

I find your writing pedestrian and your symbolism obvious.

They’re not always like that, of course, but you do run into the snobbish folks who think they know everything.

Plus, you occasionally get the pissing contest effect. When I worked in the newsroom, there was always an unspoken competition between the reporters: who can go the longest without looking up from the computer, who stays latest on Friday night, who has the most cans of Red Bull in their trashcan. There’s pressure to work the hardest and the longest, even when you don’t need to do it.

On the other hand, writing with a group has its benefits. You can commiserate over the need for coffee, the craziness of the plot bunny you just followed, and the hipster glasses of the person at the next table. Other writers can keep you on task, keep you sane, and inspire you. At the end of the day, the reporters could turn of their computers and go out for a beer, and we could make fun of ourselves for working so damn hard. There’s a camaraderie in the absurdity of writing as a solitary pursuit, and you can develop true friendships as you bond in your shared masochism.

It all depends on the group, though. You need a blend of levity and dedication, with a dash of quirkiness.

This year, I’ve had the pleasure of becoming part of an amazing, unconventional writing group: Team Awesome.

More accurately, #teamawesome. We’re a group of writers on Twitter. Together we chat, sprint, and WIN. In January, we collectively wrote something close to 200,000 words, which is amazing. And now that we know each other, we can beta read and generally stave off the insanity that comes from work alone.

Plus, you know, friends are good.

1 thought on “The Value of Coworkers”