Greetings, dear readers! Today we have a guest post from the awesome Emmie Mears, whose debut novel, The Masked Songbird, will be released from Harlequin on July 1. Check out what she has to say, and then be sure to run on over to Amazon and pre-order your digital copy today! 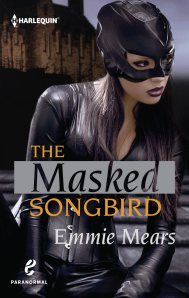 The Power of Partnership

Many parts of life require partnership. We all know the saying about how no one’s an island, yadda yadda, but when you’re in a creative profession, you can often feel like one. In my early days of writing, I wrote like an island. I didn’t seek out critique. I didn’t read craft books. I worked in an extreme version of “write what you know.”

It wasn’t until I started really reaching out to other writers that I was able to kick my writing into the next gear. My lovely host and bosom friend, Kristin, was one of those writers.

When I started querying my first novel, I had high hopes. I thought it was ready. I’d written two and a half books and had been over my first one about fifteen times in four years. I loved my characters and my story, and I was sure I was going to get an agent.

“If you’d brought this to me four years ago, I could have sold it in a hot second.”

Those were the words I heard from a powerhouse agent at my first writing conference in New York. I was shocked, but not crushed. I got a few requests from other agents that day, all of which petered into rejections. A couple months later, a bestselling author contacted me and said she liked my blog so much that she wanted to read my fiction. I sent her the first couple chapters of this book, and crossed my fingers. When she called me to talk about it, I heard the best words I think I’d heard to that point in my career:

“I don’t think this is submission ready.”

Deep down, I’d known that I hadn’t really been editing it; I’d been tinkering. I’d been on my writing island for so long that I’d been writing around in circles without realizing it.

I put that book aside to think. Two months later, I started another book. I finished it six weeks later. That was two years ago. By then, I had a team of fantastic betas and Kristin for a critique partner. In two months, I had it polished up and ready to query.

Kristin graciously agreed to host me today. I couldn’t think of a better place to start this blog tour, because that little book I scribbled out in six weeks was THE MASKED SONGBIRD, which is coming out two weeks from today from Harlequin.

Without partners, I don’t think I would be here right now. Without the feedback of people (some of it hard to hear), my debut wouldn’t yet be happening.

We really aren’t islands; even in creative professions, we need the community of peers who can offer insight and encouragement. While people can go it alone sometimes, having partners who are with you on the same path can help you get to your destination faster.

You can preorder THE MASKED SONGBIRD here (http://www.amazon.com/dp/B00JD7TWZK)! Released in a box set, you get four great paranormal and urban fantasy books for less than $4!

Emmie Mears was born in Austin, Texas, where the Lone Star state promptly spat her out at the tender age of three months. After a childhood spent mostly in Alaska, Oregon, and Montana, she became a proper vagabond and spent most of her time at university devising ways to leave the country.

Except for an ill-fated space opera she attempted at age nine, most of Emmie’s childhood was spent reading books instead of writing them. Growing up she yearned to see girls in books doing awesome things, and struggled to find stories in her beloved fantasy genre that showed female heroes saving people and hunting things. Mid-way through high school, she decided the best way to see those stories was to write them herself. She now scribbles her way through the fantasy genre, most loving to pen stories about flawed characters and gritty situations lightened with the occasional quirky humor.

Emmie now lives in her eighth US state, still yearning for a return to Scotland. She inhabits a cozy domicile outside DC with two felines who think they’re lions and tigers.

3 thoughts on “The Power of Partnership: Guest Post by Emmie Mears”