I tend to get twitchy and hovery when beta-readers have my book. I go all mother-hen on my words and want to protect them, justify them, or generally cling to them. 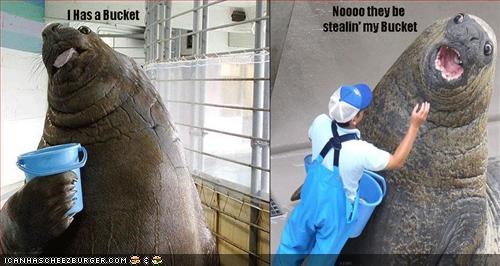 My words… they be stealin’ my words!

How I handled cheerfully sending off submissions and waiting weeks or months to hear back last fall is beyond me. I was a basket case, sure, but I think maybe the lack of access to the reader helped me keep at least a little of my cool.

But for beta-reading… well… one of my readers is my husband. I can watch him read every page. I twitch every time he circles something and I can do sneaky side-eyes at the notes he’s writing. I can see how my book is affecting someone as it’s happening.

It must really suck for him.

And as for my other reader? Well, I talk to Emmie Mears just about every day, but I can’t stalk her in quite the same way. I’m reduced to lurking, wondering, biting my nails, and trying not to send her emails that contain each of the pilfered notes from my husband’s reading.

Me, not waiting or watching. Totally.

I think I need another hobby, guys.

Writers, how do you handle the period when beta-readers have your book? Do you hover? Or am I just exceptionally neurotic?

There’s a Lacuna Coil song called “When a Dead Man Walks” that runs,

But I don’t look back…

This song has been stuck in my head for a couple of days.

Why? On Friday, I finished a fairly solid second draft of Shaken and sent it out to about 10 beta readers. (I rolled with sending it to everyone who asked for it, figuring from some of my blog-readers’ experience that only about half of those beta-readers would even finish the book, let alone give me feedback.) I was excited, giddy even, glad to have earned a break from the book and eager to get some feedback.

I’d sent my baby out to almost a dozen people, some of them practically strangers! It was like I’d sent them all naked pictures of myself or something! I was crazy to ever think I could write a novel! My plot was stupid, my main character too unlikable! I didn’t warn anyone that it’s R-rated, and I didn’t tell my San Francisco-based friend just how much I’d violated the geography of that lovely city! The world will end if someone notices that I put a hotel on a coast that has no hotel!

I’m sure you fellow writers have your own version of that speech memorized.

Terrified, I got up at that unholy weekend hour, only to find a message from one of my lovely new beta-readers. She’d stayed up all night reading the book and had loved it. My ego could go soundly back to sleep… of course I’ve been too nervous about it since then to even pretend I’ve had a good night’s sleep.

By now, I’ve gotten some more positive feedback, but here’s the nutty thing: It hasn’t helped.

What if they’re just being nice? What if they don’t know me well enough to tell me they hate it? What if they’ve actually been kidnapped by aliens and replaced by doppelgangers who say only nice things? How can I stand not knowing?!

Suddenly the whole submission process has gotten unbelievably real. Yes, I wrote this book and created this character, but I have to let it and her go out into the world and make her own way. I can’t protect it: I can’t tell people how to read it or what to look for. But like the song says, I can’t look back. If I want to proceed with this, I have to let the book go.

I brought up paranoia because I’ve been doubting the good things I’ve heard, preparing myself for the absolute worst, because I know it’s still out there. Rejection is inevitable.

Is it paranoia, then? Or am I being smart, trying to protect myself from getting hurt? I really can’t say.

To the writers out there: How did you feel when you first let people read your novel? Were you terrified? Confident? What did you do to stay busy while you awaited feedback?

My plan is to work on my balcony-garden, do some beta-reading myself, and start writing the materials for a seminar I’m teaching this summer. That was the plan. In reality, I’ve mostly been watching Downton Abbey.

I’m about a week, maybe two, from finishing the second draft of Shaken. It won’t be perfect, but it will be ready for fresh eyes not yet jaded by the detailed readings my fiance and I have given it.

Honestly, it’s just words to me now. I killed a darling sentence awhile back, and since then, I’ve been ruthless: deleting right and left, adding where needed, and generally trying to turn a rough draft into page-turning urban fantasy mystery. But I know the story so well that I can delete things and still understand what’s going on and why—things someone less familiar with the story may not follow.

So I’m starting to hunt the wilds of my life for potential beta readers.

Hunting pedestrians in a car is probably easier than hunting beta readers.

This girl wants to read it, but she doesn’t really read urban fantasy and may not have much feedback to offer. This person will love it no matter what. This person will be so harsh I may have to jump off a bridge when I receive notes.

One person in my sights seems promising, but asking someone to beta-read seems  like a big commitment or something. Do I want to reveal to him my deep artistic vulnerability? Will he have time to read my novel in the next six days, let alone six weeks or even months? Will he love me enough to keep reading my book after the tenth time he’s seen my inconsistency in capitalizing a world-specific word?

Another person I’ve been stalking for awhile, circling my prey and trying to gauge if I can separate her from the herd of reading-exchange-buddies. She doesn’t seem weak enough to fall for the writer’s equivalent of the bird-call, the offer for a beta read in exchange… but perhaps if I could lure her into my trap with an offer of cookies and coffee?

Beta readers are no easy prey, friends. One may look plump and weak, but then gore you with its horns. Another may flee at the first sign of a split-infinitive. Still another may stand aside and offer you not just hunting tips, but also plotting strategy and better names for characters, and, really, she could have done it better than you if only you’d come to her sooner.

No, be wary when venturing into the beta reader habitat. A beta reader might have told me to stop mixing my metaphors in this blog post, but perhaps he wouldn’t have gotten my ironic sense of whimsy—and if I changed it to suit his wishes, would I kill my voice and just be writing to please him? Or worse, if I refuse and preserve my voice instead of taking his advice, will I discover that my voice is pitchy enough to make ears bleed and therefore unpublishable?

I tell you, readers, this is a safari into the deepest wilds of friendship and acquaintanceship. If I haven’t come out of the jungle in a month, tell my cats I loved them.

How do you find beta readers, readers-who-are-writers? What do you look for in a beta reader?