Throughout season four of True Blood, my constant refrain was, “This has to be offensive to Wiccans.” From what I know of Wicca, necromancy and murder aren’t high on the list of healthy pastimes. 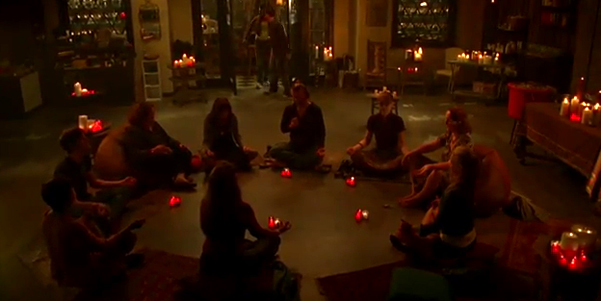 Now that season five has rolled around, though, my refrain is, “Whoa, this is super-offensive to Christians!” The vampires worship Lilith and call the “vampire bible” the true sacred text? Yikes.

It’s gotten me thinking about the treatment of religion in works of urban fantasy. Most universes with demons, ghosts, or witches tend to look toward Judeo-Christian mythology and either corrupt it or use it to ‘preach’ to the audience. On the other side of the coin, we have worlds like the ‘Buffy-verse,’ where Wicca is synonymous with the practice of actual magic and there’s very little worship involved. Religion seems to inform these universes by adding a vocabulary and a mythology rather than shaping them with any remnant of accuracy. And that may not be acceptable to viewers with strong religious belief, of any creed or pantheon.

While we can’t treat religion with kid gloves, we should ask: how far is too far?

Note: this blog post will deal mostly with Christian and Neopagan traditions, only because those are the religions with which I am most familiar. Please, if you can think of additional shows with treatments of additional faiths, leave a comment!

Let’s look at a few portrayal of religion in televised urban fantasy (and/or sci-fi):

Supernatural
Operating within the Judeo-Christian mythology, the Winchesters fight demons, ghosts, pagan gods (who inevitably eat humans), witches (who deal with demons), and even angels. Season five deals with the battle between Michael and Lucifer (yep, that Michael and that Lucifer), who want Dean and Sam respectively as their “vessels.” The boys end up locking both Michael and Lucifer into “the cage,” some trap in hell from which even an archangel can’t escape.

That’s dancing on the line of what may be offensive to some viewers, Christian and Neopagan, but the real rub comes from the show’s treatment of God: he’s missing. Portrayed as an absentee father who never appears in the show and causes endless speculation among viewers, God has washed his hands of the whole race and no longer acts even in the capacity of a deistic “divine mover.” And Jesus? The elephant in the room, so to speak, is never even mentioned.

Angels are not soft and fluffy.

True Blood
As mentioned above, we had a season in which Wiccans appear as harmless Goddess-worshippers and quickly fall under the management of a true witch who wields the power of necromancy and harbors a serious vendetta against vampires. Now we’re learning that the Vampire Authority is split between those who worship Lilith by rote and “terrorists” who fight in Lilith’s name to institute the factory-farming of humans. They quote scripture, too.

Characters frequently pray and ask for God’s protection against the supernatural, but we rarely see truly “good Christian” behavior. Our only experience with a pastor is a man who has an affair with a main character’s mother and later performs an exorcism. That’s… not very inspiring.

It seems that True Blood is an equal opportunity offender.

One believer tortures another.

Buffy the Vampire Slayer
Buffy exists primarily in a dualistic, secular-humanistic universe. There is a First Evil, but the power of Good and the power of Evil are accessible to humans. The Powers That Be employ and equip champions like Buffy and Angel to fight Evil, but other humans are perfectly capable of fighting against evil without supernatural powers. I’m down with that—I really enjoy system built from the ground up, and this one is such that most dualist believers can place their personal mythology around the show’s framework, while non-believers can watch without offense.

But then there’s the whole sticky wicket of Willow’s “Wicca” and subsequent addiction to magic, which I’ve written about before. The conflation of Wicca and “Powers of Darkness” probably isn’t appreciated by practitioners of a religion that aims to harm none and live in harmony with nature.

Willow prepares to sacrifice a lamb as part of a spell to resurrect Buffy.

Charmed
Confession: I’m not a Charmed fan. I never watched it as a teen, and when I tried to watch it as an adult, it just didn’t click for me. (I believe the words “sooooo cheesy” came out of my mouth repeatedly.) The show uses Wicca/witchcraft and Wiccan/witch synonymously, even though the characters operate within a Christian framework. Angst follows when a protagonist who identifies herself as Christian discovers that she’s a witch—even though she’s a witch that fights demons.

The show jams Christian mythology and dualism together with so-called Wicca (which is duotheist, not dualistic) and witchcraft, and the resulting blend tastes a little sour to me. The internet is rife with diatribes from both religions, complaining about how the show is Satanic or just plain inaccurate. (Aside: if you like Charmed, please tell me why. I’m always willing to be convinced.)

I’m not sure how they end up reconciling witchcraft to a Christian outlook.

The X-Files
This show spans way too many episodes and monsters-of-the-week for me to discuss them all, but a recurring theme is Scully’s semi-devout Catholicism at war with the things she sees in the show. The show takes that juxtaposition seriously, and it deals with the ongoing battle of how people explain the presence of great good and great evil in the world.

Although the show portrays witchcraft as a “black art” at times, it also presents a villain from Orthodox Jewish mythology: perhaps, like True Blood it offends across the board. That said, I believe that the show portrays supernatural or religious power as good or bad, depending on what the user makes of it. In this universe, Christians are just as likely to do evil as witches.

Mulder and Scully continually debate the merits of belief in a higher power.

Doctor Who
The X-Files‘s stance brings us to our final example, the classic British sci-fi show that perpetually looks askance at religion. Religion is forbidden on shuttle platforms, along with weapons and teleportation. The universe’s Big Bad, the Daleks, are the ones who kill because of belief and blasphemy. The Doctor himself treats religion with disdain, attributing to it more death and woe than many other human practices. While a discussion of religion in Doctor Who could run textbook length, I think it’s sufficient to say that religion occupies a fraught position in that war-torn universe. 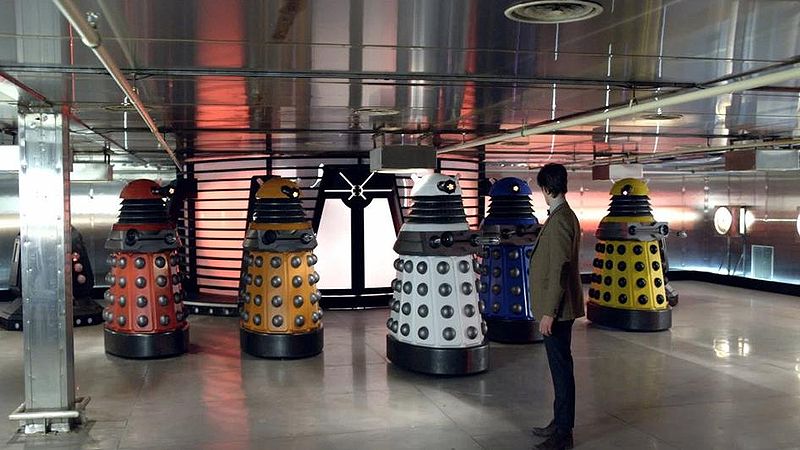 The Doctor mocks the “impure” Daleks, whose own technology does not recognize them.

That’s just a sampling of portrayals of religion in urban fantasy and/or sci-fi, and it doesn’t even include books. What do you think, readers? How well does religion stand up in a world of magic and mayhem? What other shows treat faith with finesse or with brutality?